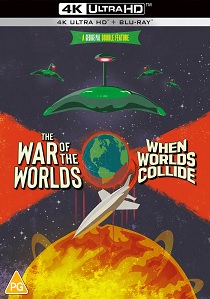 Two of the most iconic science fiction epics from Paramount Pictures come together in one out-of-this-world double feature from producer George Pal.

Making its 4K UHD debut, The War Of The Worlds, released 7th November 2022 is an Oscar®-winning adaptation of the chilling H.G. Wells novel. Then, get ready for impending disaster when a runaway star signals the destruction of Earth in When Worlds Collide, included on Blu-ray remastered from the original film elements.

Both films are essential Technicolor masterpieces from the Golden Age of Hollywood, delivering eye-popping visual effects.

HotDVDBD
From the producers of Nobody and John Wick comes a bare-knuckle, coal-dark holiday action-comedy that says you should always bet on red as Violent Night sledges in on DVD and Blu-ray 6th March 2023 from Warner Home Video. END_OF_DOCUMENT_TOKEN_TO_BE_REPLACED
Top PicksView