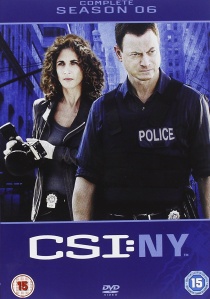 When CSIs are let loose in the Big Apple, you know they're going to encounter some of the worst crime on the streets. Two of the most fearless CSIs, Mac Taylor (Gary Sinise) and Stella Bonasera (Melina Kanakaredes), lead a determined team of forensic experts to solve crime at any cost. Catch all of the relentless action when CSI: NY The Complete Sixth Season is released on DVD by Momentum Pictures on 20th September 2010.

For the first time ever all three CSI teams intertwine this heart-stopping season as Ray Langston (Laurence Fishburne) of the Las Vegas crime lab follows a human-trafficking ring that specialises in black-market organ harvesting to New York. It's here he assists the NY CSIs to free a hostage taken by the criminal group and stumbles across a jaw dropping case.

The story began with a missing person's case on CSI: Miami and finishes in CSI: Crime Scene Investigation, as ties to the case leads the team to a prostitution ring in Las Vegas. Concluding this season, the CSI team tackles one of the most personal cases to date as Shane Casey (Edward Furlong), an old enemy from the past, continues to cause problems for the CSI team and prosecutors who put his brother behind bars. This time it's personal, as Mac discovers Casey has murdered his former cellmate, and is now targeting CSI team member Danny (Carmine Giovinazzo).

The team must run against the clock to follow a trail left by Shane before it's too late. As a gun shot is heard in the final scene, audiences are left wondering who will survive.

UHD
Based on the global blockbuster videogame franchise from Sega, Sonic The Hedgehog, released on DVD, Blu-ray and 4K UHD from 8th June 2020 from Paramount Home Entertainment, tells the story of the ... END_OF_DOCUMENT_TOKEN_TO_BE_REPLACED
Top PicksView