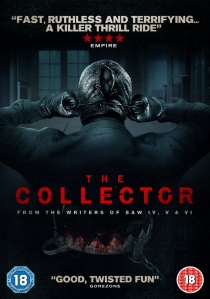 NewsHorrorThriller
News Article Go back to homepage
In the run-up to Halloween, one film will stand-out amongst all others as the one of the goriest and most suspenseful horror films ever made... Icon Home Entertainment is pleased to announce the Blu-ray and DVD release of the macabre, suspense-filled horror thriller The Collector on 18th October 2010.
Andrea Roth, Michael Reilly Burke, Josh Stewart, Juan Fernández, Diane Ayala Goldner, William Prael
Marcus Dunstan
Shanon Davis, Charles Davidson, Tighe Michael Curran, Courtney Balaker
Icon Home Entertainment
1 hour 30 minutes
18/10/2010
Thank you for supporting DVD365.net when you order using the link(s) below. As an Amazon Associate we earn from qualifying purchases
Buy DVD
Buy BD
Information

In the run-up to Halloween, one film will stand-out amongst all others as the one of the goriest and most suspenseful horror films ever made... Icon Home Entertainment is pleased to announce the Blu-ray and DVD release of the macabre, suspense-filled horror thriller The Collector on 18th October 2010.

From Marcus Dunstan and Patrick Melton, the writers responsible for the horror blockbusters Saw IV, V, VI, and the guys currently behind Saw VII 3D, The Collector emerges as a real-time game of cat-and-mouse with a terrifying twist, making it the perfect Halloween purchase for any dedicated horror enthusiast.

For handyman and ex-con, Arkin (Josh Stewart), a quiet home and a family on vacation is an "opportunity". During his time working on the family's property before they depart, Arkin discovers a hidden safe, containing a rare and valuable gem. As soon as the owners are out of the picture, Arkin sees his opportunity to hack the safe steal the stone - the only chance he has to repay his ex-wife's dept, and keep his young family together.

The bad news for Arkin? Once he returns to the house after dark, he quickly finds it not to be as empty as he'd hoped it would be. Whilst working the safe he hears noises inside the house and, while checking the place over, he stumbles across a mysterious box, containing a tortured and terrified stranger - the latest specimen in a vast collection, catalogued in blood, bone and tears. By opening the box, Arkin alerts the attention of its owner, The Collector, and by doing so enters into a twisted game of Cat and Mouse, trying to keep his own life intact whilst trying to save those of the vacationing family, who are locked inside their own home.

As The Collector tortures parents Michael (Michael Reilly Burke) and Victoria (Andrea Roth) - far from the vacation they had seen in the brochure - he has yet to capture teenage daughter Jill (Madeline Zima) and eight-year old Hannah (Karley Scott-Collins). As the seconds tick agonisingly closer to midnight and his ex's deadline, Arkin becomes a reluctant hero trapped in a maze of lethal invention, while trying to rescue the very same family he planned to rob.