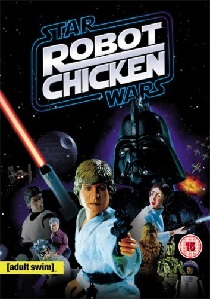 Revolver Entertainment will be bringing the force closer to home with the release of Robot Chicken Star Wars, a special Robot Chicken episode of hilarious Star Wars inspired sketches on a DVD loaded with extras. This Star Wars special of the Emmy Award-winning stop-motion animated show Robot Chicken will launch the hugely successful US animation brand [adult swim] on DVD in the UK on 11th August 2008.

The legendary story of the intergalactic struggle between good vs. evil gets a unique make-over in Robot Chicken: Star Wars with full endorsement from Lucasfilm. The episode brazenly combines the satirical touch of the show's creators Seth Green (Austin Powers, Buffy the Vampire Slayer) and Matthew Senreich's Robot Chicken, with the unforgettable moments and favourite characters of the Star Wars universe - among them, the creator himself, George Lucas is transformed into a stop-motion animated character which he also voiced.

"The special is a funny and ironic take on the Star Wars universe," says Seth Green. "We're thrilled to be able to collaborate with Lucasfilm Ltd. and to have fun with the very property that shaped our sensibilities." In addition to having the Star Wars creator George Lucas himself voice his stopmotion animated likeness for the special, other noteworthy voice actors include Mark Hamill as Luke Skywalker, Breckin Meyer, Malcolm McDowell, Donald Faison, Hulk Hogan and James Van Der Beek.

In this extended show, The Galaxy takes on an entirely different attitude as we see Emperor Palpatine receive a reverse charge call from the Dark Lord announcing the destruction of the Death Star, watch the droids have trouble getting through airport security and see Admiral Akbar selling out in an advert for his own breakfast cereal. George Lucas gets saved from a mob of nerds at a Star Wars convention, Luke and the Emperor settle things with a "yo mama" fight and there's even a new unforgettable addition to the Star Wars franchise with "Empire on Ice". And that's just a snippet of the 35 sketches featured in this special episode of Robot Chicken.