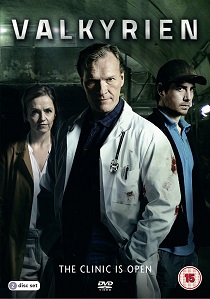 Brand new high-concept Scandi-noir thriller Valkyrien is set to take the UK by storm and will make its DVD debut from Acorn Media International following its run on C4 and Walter Presents.

Forbidden by hospital authorities to continue experimental research to save his terminally ill wife, a leading surgeon sets up an illegal hospital in an abandoned Oslo subway in this enthralling awardwinning Norwegian drama. This eight-part series arrives on DVD as a two-disc set on 21st August 2017.

Doctor Ravn (Sven Nordin) is desperate to find a cure for his dying wife Vilma (Pia Halvorsen). When the hospital stops her treatment, he continues to work in secret and is forced to compromise his ethics and join forces with corrupt civil defence worker and Doomsday prepper, Leif (Pål Sverre Valheim Hagen), who has widespread knowledge of the city's underground shelters and secret passages, as well as significant connections with the Oslo underworld.

Together they build an illegal clinic in an old bomb shelter deep underground Valkyrien Square, Oslo. As Ravn continues his research to save his wife, he must also care for criminals who need to avoid the authorities. Ravn believes he will find a miracle cure, while Leif is convinced that the end of the world is nigh; who will prevail?

This thrilling new series Nordic-noir drama will grip you from start to finish.

HotDVDBD
From the producers of Nobody and John Wick comes a bare-knuckle, coal-dark holiday action-comedy that says you should always bet on red as Violent Night sledges in on DVD and Blu-ray 6th March 2023 from Warner Home Video. END_OF_DOCUMENT_TOKEN_TO_BE_REPLACED
Top PicksView