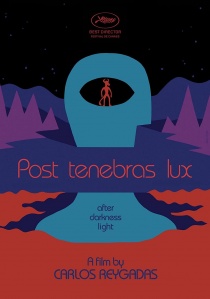 Drakes Avenue Pictures and The Independent Cinema Office and are pleased to announce that Carlos Reygadas' (Battle in Heaven, Silent Light) Post Tenebras Lux will be available on DVD and on Blu Ray for the first time from 22th July 2013.

Reygadas picked up Best Director in Cannes last year for Post Tenebras Lux, perhaps his most personal and complex work to-date. A gorgeous, allusive mood piece examining marriage, poverty, class and gender, the film also looks at our place in nature and how evil lives with us in the most intimate and ordinary of places.

Juan (Adolfo Jiménez Castro) is a wealthy industrialist who has chosen to live with his wife and two children away from the trappings of wealth and the city. Yet isolation in this superficially idyllic rural landscape seems to have brought little peace to his world. Juan's marriage to Natalia (Nathalia Acevedo) is suffering under the strain of sexual ennui, the banal rigors of bringing up young children and living in a community where he is clearly an outsider.

Its central theme, signposted in an audacious manner very early on, is Juan's struggle to morally navigate the welter of everyday decisions we are all forced to make in life. The morality of family life is further complicated by Juan's post-colonial Mexican ethnicity and position as an employer and elite landowner in a country with an increasingly divergent wealth divide.

Largely non-linear in its structure, preferring instead to show a series of striking images from the past, present and possible futures, Post Tenebras Lux repays repeat viewings allowing its myriad ideas to slowly rise to the fore. What lingers long after viewing are not only the more striking images, but also the subtler aspects of family life, the tender fragility of childhood and marriage, and the beautifully haunting representations of nature.

DVD
A 13-year-old girl named Meilin turns into a giant red panda whenever she gets too excited in Disney and Pixar's 25th feature film Turning Red, released on DVD, Blu-ray and 4K UHD 2nd May 2022 from Walt Disney Home ... END_OF_DOCUMENT_TOKEN_TO_BE_REPLACED
Top PicksView