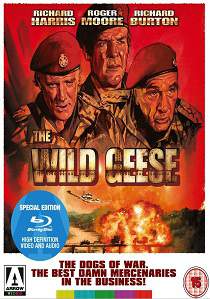 Legendary hell-raisers Richard Burton and Richard Harris, along with a coolly detached Roger Moore are aging mercenaries with a taste for fine liquor, drawn together for a late but extremely lucrative pay day in The Wild Geese, released on Blu-Ray from Arrow Films on 30th July 2012, in an African adventure soaked in booze, gunfire and bloodshed.

Colonel Allen Faulkner (Burton) is secretly back in London to accept the task of reinstating an African leader deposed in a violent military coup, but without the combat skills of his two old friends, there isn't going to be a mission. With his two reliable loose cannons in place, Faulkner and the team enact a text book rescue operation but disaster is close at hand when the cynical multinational who set up the whole deal turns the tables, striking a new deal with the local despot which sees The Wild Geese trying to escape with their lives intact.

The Wild Geese are ready for one last mission so finish your drinks and relive this classic old school British action adventure today.

BD
Arriving on DVD and Blu-ray 31st May 2021 from Acorn Media (UK), the hit police corruption drama from the makers of Bodyguard returns as Series Six of Line of Duty sees AC-12 facing their most ... END_OF_DOCUMENT_TOKEN_TO_BE_REPLACED
Top PicksView