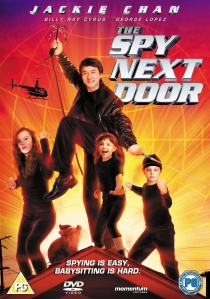 Evil empires and the world's most wanted criminals are nothing compared to Secret Agent Bob Ho's next assignment as The Spy Next Door, a fantastic family adventure released on DVD and Blu-ray on 2nd August 2010 by Momentum Pictures.

While baby-sitting his girlfriend's three children, former secret agent Bob (Chan) is forced out of retirement when one of the kids accesses top secret information that places them all in danger. But before our hero can take on the bad guys, he has to get three unruly youngsters to behave! Bob has to achieve the seemingly impossible without revealing his secret identity.

Directed by family comedy king Brian Levant (Are we there yet, Jingle All The Way, Problem Child 2, Beethoven) The Spy Next Door is loaded with exclusive extras including 'Adventures in Acting' a featurette with the kids from the film and Jackie Chan: Stunt Master and Mentor, a featurette on the one and only Jackie Chan himself.

Don't miss your chance to check out the world's coolest babysitter in action, when The Spy Next Door is released on 2nd August 2010, available on DVD and double pack Blu-ray and DVD.