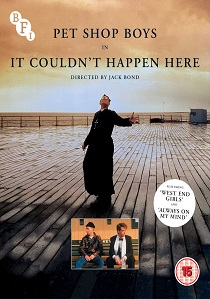 Director Jack Bond (The Blueblack Hussar) originally set out to make an extended pop video based on Pet Shop Boys' 1987 album Actually. What he ended up with was a flamboyantly full-scale feature film that finds Neil Tennant and Chris Lowe embarking on an outstanding musical odyssey from coast to capital, encountering the eccentric likes of screen legends Joss Ackland, Gareth Hunt and Barbara Windsor along the way.

Perfect pop surrealism meets road movie to the sound of hits from the duo's fantastic first two studio albums, including all-time classics West End Girls, It's a Sin and Always On My Mind.

Long unavailable, It Couldn't Happen Here is finally presented here remastered by the BFI in High Definition at 4K resolution, to make its overdue worldwide Blu-ray and DVD debut on 15th June 2020.

A strange, striking and sensational pop musical, packed full of iconic tracks, it is an essential addition to any Pet Shop Boys collection.