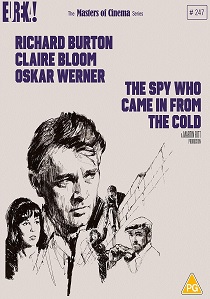 NewsDramaThrillerRichard Burton
News Article Go back to homepage
From the acclaimed, best-selling novel by John le Carré, for the first time in the UK the Masters of Cinema Series is proud to present The Spy Who Came in from the Cold on Blu-ray 17th May 2021.
Richard Burton, Claire Bloom, Oskar Werner, Sam Wanamaker, George Voskovec, Rupert Davies
Martin Ritt
Martin Ritt
Eureka Entertainment
1 hour 58 minutes
17/05/2021
#TheSpyWhoCameInFromTheCold #MastersOfCinema
Thank you for supporting DVD365.net when you order using the link(s) below. As an Amazon Associate we earn from qualifying purchases
Buy BD
Information

The acclaimed, best-selling novel by John le Carré, about a Cold War spy on one final dangerous mission in East Germany, is transmuted by director Martin Ritt (Hud, Norma Rae) into a film every bit as precise and ruthless as the book.

Academy Award-nominated Richard Burton (Who's Afraid of Virginia Woolf, Becket, 1984) is superb as Alec Leamas, whose relationship with the beautiful librarian Nan, played by ClaireBloom (Hamlet, A Streetcar Named Desire), puts his assignment in jeopardy.

Winner of 4 BAFTA Awards (including Best British Film) The Spy Who Came in from the Cold is a hard-edged and tragic thriller, suffused with the political and social consciousness that defined Ritt's career. The Masters of Cinema Series is proud to present the film on Blu-ray for the first time in the UK on Blu-ray on 17th May 2021.