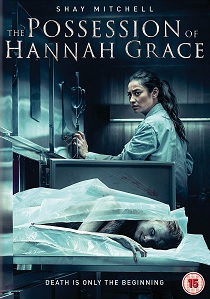 The Possession of Hannah Grace (2018)

Death is only the beginning in the heart pounding horror thriller The Possession Of Hannah Grace, debuting on DVD 8th April 2019 from Sony Pictures Home Entertainment.

Shay Mitchell (Pretty Little Liars, You) stars as a cop just out of rehab, who takes the graveyard shift in a city hospital morgue where she faces a series of bizarre, violent events caused by an evil entity in one of the corpses. The Possession Of Hannah Grace also stars Grey Damon (Station 19), Kirby Johnson (5150), Louis Herthum (Westworld) and Stana Katic (Castle).

The Possession Of Hannah Grace Digital and DVD releases come loaded with bonus content, including a deleted scene and two behind-the-scenes featurettes. Take a deep dive with the killer cast and get to know the film's characters a little better with Shay Mitchell, Grey Damon, Nick Thune (Venom) and Kirby Johnson. In An Autopsy of Hannah, go behind the scenes with head makeup artist Adrien Morot and uncover the transformation process, learning Adrien's vision for the character, tricks for nailing the look, and what it took to get into the creepy mindset of Hannah Grace. Slashes and gashes and cuts, oh my! Finally, it must get lonely spending night after night alone in a morgue - see how Megan (Shay Mitchell) keeps herself entertained during the long shifts in Megan's Diaries.

A shocking exorcism spirals out of control, claiming the life of a young woman. Months later, Megan Reed (Shay Mitchell) is working the graveyard shift in the morgue when she takes delivery of a disfigured cadaver. Locked alone inside the basement corridors, Megan begins to experience horrifying visions and starts to suspect that the body may be possessed by a ruthless demonic force.

Directed by Diederik Van Rooijen and written by Brian Sieve (Scream TV series), The Possession Of Hannah Grace was executive produced by Glenn S. Gainor and produced by Todd Garner and Sean Robins.

DVD
Two lifelong friends find themselves at an impasse when one abruptly ends their relationship, with alarming consequences for both of them in The Banshees Of Inisherin, released on DVD and Blu-ray 30th January 2023 from Walt ... END_OF_DOCUMENT_TOKEN_TO_BE_REPLACED
Top PicksView