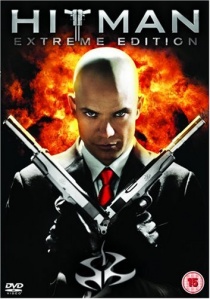 It's time to lock and load. On 31st March 2008, movie fans can take aim as Hitman appears in the crosshairs on DVD and Blu-Ray from Twentieth Century Fox Home Entertainment. A dark and violent action thriller from producer Luc Besson, who directed La Femme Nikita, The Fifth Element and Leon/The Professional, the film is based on the global video game phenomenon that has sold over seven million units worldwide and gives viewers a fantastic chance to see sexy Olga Kurylenko in action before she kicks ass with 007 later this year.

Directed by newcomer Xavier Gens, Hitman is a highly stylised and voraciously violent film, following the trail of Agent 47, played by Timothy Olyphant (Deadwood, Die Hard 4.0, Gone in Sixty Seconds), as he bids for bloodthirsty revenge on those who have double-crossed him. A lone gun killer, he is unremitting in his devotion to bullets and bloodshed, but not even he can anticipate the unexpected and unfamiliar stirrings aroused in him by a mysterious Russian babe, Nika (Kurylenko).

Trained as the ultimate professional assassin, Agent 47 packs an arsenal that would put the military to shame, although his greatest weapons are his steely nerve, his unwavering precision and the resolute pride he takes in his brutal work.

Loaded with political conspiracy, murky machinations and a whole heap of violence, Hitman is brimming with high-tempo gunfights - in crowded locations, of course - while the DVD version features additional footage not seen in the theatrical release. Armed with a host of with extras, the DVD release of Hitman is a smooth and sexy romp through the world of professional carnage!