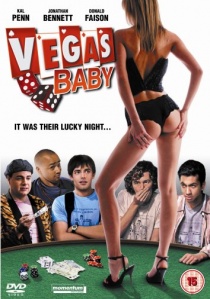 A hilarious comedy set in the heart of the infamous sin city, Vegas Baby is a laugh a minute riotous romp that revolves around five friends who head to Vegas for a wild weekend of partying to celebrate an impending marriage.

Set for a 31st March 2008 DVD release from Momentum Pictures, Vegas Baby is filled with comedians from the prestigious worlds of Van Wilder, Harold and Kumar, Scrubs and My Name Is Earl. So if you fancy a night of strippers, notorious casino robbers and Ultimate Fighting Champions, amongst the other absurdities that only Vegas can serve up, then you need look no further than this hilarious comedy caper.

Directed by Eric Bernt (writer of Romeo Must Die and The Hitcher), Vegas Baby stars Kal Penn (Van Wilder, Superman Returns, Harold and Kumar), Jonathan Bennett (Mean Girls, Cheaper by the Dozen 2), Donald Faison (Scrubs) with appearances from UFC champion "The Iceman" Chuck Liddell and Jaime Pressley (My Name is Earl) as themselves.

Z-Bob, Eli, Ash and Johnny are life long buddies who are about to send their best friend, Nathan, into uncharted territory... marriage. But in order to properly bid farewell to their best friend's life as a single man they must send him out in style, with a trip to the city of sin.

HotUHD
Now more stunning than ever before, return to the stunning locations and epic adventures in Peter Jackson's Middle-earth in The Lord of the Rings Trilogy, arriving on stunning 4K UHD 30th November 2020 from Warner Home Video. END_OF_DOCUMENT_TOKEN_TO_BE_REPLACED
Top PicksView