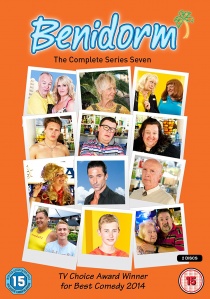 The summer sun is blazing across Benidorm's blue skies and the Solana is once again open for business. Manageress Joyce Temple-Savage (Sherrie Hewson) and her magnificent staff including lothario waiter Mateo (Jake Canuso) return in full force in the seventh series of the award-winning sitcom Benidorm, out on DVD 23rd February 2014, courtesy of BBC Worldwide.

Series 7 sees the Garveys, played by Steve Pemberton (Inside No. 9, Happy Valley) and Siobhan Finneran (Downton Abbey) and Sheila Reid bid farewell to sunny Benidorm. But before they say "Adios", one more holiday adventure awaits them as The Oracle (Jonny Vegas), his mother Noreen, and former manager Janey York land at the Solana resort.

Filled with heart-melting and jaw-dropping storylines and crammed with best-loved characters and fantastic VIP appearances from Joan Collins, Amanda Barrie, John Challis, Bobby Crush, Leslie Jordan, Ruth Madoc, Denise Black and Nadia Sawalha, brand-new Benidorm on DVD has all the makings of a holiday of a lifetime. Sun-soaked DVD extras include hilarious outtakes.