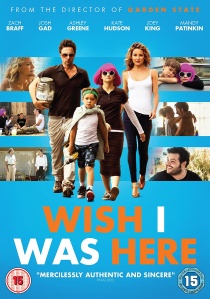 After making his directorial debut with Garden State, Zach Braff returns with the much- anticipated Wish I Was Here, a Kickstarter-funded comedic drama co-written with brother Adam J. Braff, released on DVD by Koch Media on 26th January 2015.

Wish I Was Here follows the life of Aidan Bloom (Zach Braff), an L.A-based mid-thirties husband, out-of-work actor and non-practising Jew. Approaching a crisis point in his life, he's reluctant to give up on his dream of becoming an actor yet feels the strain he's putting on his wife, Sarah (Kate Hudson), the sole breadwinner. When his father (Mandy Patinkin), gets ill and they can no longer afford to send their kids (Joey King and Pierce Gagnon), to a private Hebrew school, Aidan is forced to re-evaluate everything. Not easy for a guy who still daydreams he's a spaceman.

Also starring Josh Gad, Jim Parsons and Ashley Greene, Wish I Was Here is the uplifting and relatable story of life, love and family for a thirty-something man who finds himself at major crossroads. The talk of Sundance festival on its debut earlier this year, Wish I Was Here is renowned as one of the biggest Kickstarter projects ever created and features soundtrack music from the likes of The Shins, Bon Iver, Coldplay, Cat Power and Paul Simon.

The production team looked for creative alternatives to fund the movie on the crowdfunding site Kickstarter. "When we were having a surprisingly difficult time getting money for the film and it looked like we weren't going to make the film or we were going to make it in such a compromised way that it still might not come together, it became obvious to us that it was just as much of a risk to do try this new paradigm", Producer Stacey Sher says.

Zach Braff expanded "I had been involved with Kickstarter because I love gadgets and I love innova tion. I'm blessed with a loyal web following. With that knowledge, we said, 'It's worth a try.' You make your pitch to the people and people say 'yes,' or 'no".'

The Kickstarter campaign exceeded expectations and raised 3.1 million dollars, over a million over the goal - in a staggering 48 hours.. Producer Coco Francini notes, "There is nothing more motivational than having almost fifty-thousand people cheering you on (1400+ UK backers alone). We knew we needed to deliver a great movie and a great experience for the entire community that came together to make this film a reality". One of the peldges they made was to host exclusive preview screenings for backers in their respective nations, with a Q&A from Zach Braff himself. In September 2014 such a screening was held in London for 1100+ UK backers at the O2 with Zach in attendance to meet his passionate supporters.

BD
For the first time in the cinematic history of Spider-Man, our friendly neighborhood hero's identity is revealed in Spider-Man: No Way Home, released on DVD, Blu-ray and 4K UHD 4th April 2022 from Sony Pictures Home ... END_OF_DOCUMENT_TOKEN_TO_BE_REPLACED
Top PicksView