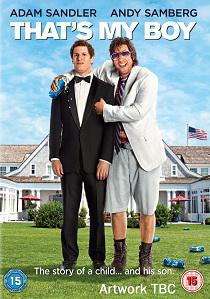 Bonus features include five deleted scenes, a gag reel and exclusive to the Blu-ray three behind-the-scenes featurettess. The "Who Are All these People?" feature highlights the cast and cameo appearances in the film. "Greetings From Cape Cod" discusses the beach house location and the bad weather. "Classy Rick's Bacon and Leggs" focuses on scenes from the film that took place in Classy Rick's strip club.

While still in his teens, Donny (Adam Sandler) fathered a son, Todd (Andy Samberg) and raised him as a single parent until Todd's 18th birthday. Now, after not seeing each other for years, Todd's world comes crashing down on the eve of his wedding when an uninvited Donny suddenly shows up. Trying desperately to reconnect with his son, Donny is now forced to deal with the repercussions of his bad parenting skills with outrageous events happening along the way.

That's My Boy was directed by Sean Anders from the screenplay by David Caspe. It was produced by Adam Sandler, Allen Covert, Jack Giarraputo and Heather Parry, with Barry Bernadi and John Morris serving as executive producers.