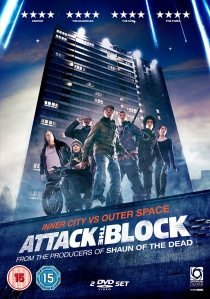 From the producers of Shaun of the Dead and Scott Pilgrim vs The World, Attack The Block, released on DVD and Blu-Ray from Optimum Home Entertainment on 19th September 2011, is a fast, funny, frightening action adventure movie that pits a teen gang against an invasion of savage alien monsters. It turns a London housing estate into a sci-fi playground. A tower block into a fortress under siege. And teenage street kids into heroes. It's inner city versus outer space.

On Guy Fawkes Night in a council estate in South London trainee nurse Sam (Jodie Whittaker) is walking home to her tower block when she's robbed by a gang of masked, hooded teens. She's saved when a fiery object falls from the sky and crashes into a nearby car. With their victim taking her chance to flee, they investigate and find it's a meteor from outer space and it's brought along something for the ride.

Confident of victory against such feeble invaders, the gang grab weapons, mount bikes and mopeds and set out to defend their turf. But this time, the creatures are bigger. Much bigger. Savage, shadowy and bestial, they are hunting their fallen comrade and nothing will stand in their way. The estate is about to become a battleground. And the bunch of no-hope kids who just attacked Sam are about to become her and the block's, only hope.

HotDVDBDTVBoxset
After the defeat of Eobard Thawne and his equally nefarious Legion of Doom, the Legends face a new existential threat created by their actions at the end of last season as DC Legends Of Tomorrow: Season 3 arrives on DVD and Blu-ray 24th September 2018 from Warner ... END_OF_DOCUMENT_TOKEN_TO_BE_REPLACED
Comments
UHD Releases News Pick