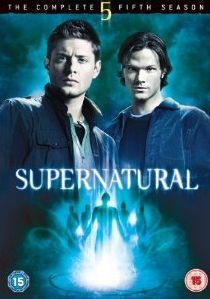 The wait is over for UK fans as the final nail biting instalment of Supernatural Season 5 is set for release on the 6th September 2010 from Warner Home Video. After their mother was heinously murdered by a mysterious demonic force twenty-three years ago, Sam (Jared Padalecki) and Dean Winchester (Jensen Ackles) were raised by their father as soldiers, joining him in his war against the evil forces that lie stealth in the backstreets of America.

Since learning from their father how to track and slay these supernatural threats, the reluctant heroes have spent their lives patrolling the highways in their 1967 Chevy Impala searching for revenge. Season 5 kicked off with Lucifer's rising and the brothers facing the catastrophic aftermath, leading them to come face to face with a demonic Paris Hilton, futuristic viruses and real life Grimms fairy tales. This road of destruction led up to the end of part one which saw the boys entering a psychiatric hospital where the monsters preying on patients turned out to be less of a threat than the brothers own personal demons, as they considered surrendering the fight.

Fortunately they man up just in time for the concluding part of the series and the boys get back on the road to try and force the devil back to his fiery pit. As the season continues the boys face an itinerary of terror, clearing up the blood spills left by a teenage nerd and his body-switching spells, townspeople who mysteriously start killing for love and even trouble closer to home when Sam and Dean's close friend Bobby is reunited with his dead wife and refuses to let go.

By the time Horsemen of the Apocalypse arrive focus is firmly set on the future and in a heart pounding two part finale the Apocalypse is finally upon them, it's time for the brothers to confront the ultimate question - can good really conquer over evil?

Created by Eric Kripke (Battle of the Sexes, Boogyman) and executively produced by McG whose directing achievements include several blockbuster movies (both Charlie's Angels movies and Terminator Salvation) and The O.C TV series, Supernatural series 5 part 2 is a must have for thrill seeking viewers.