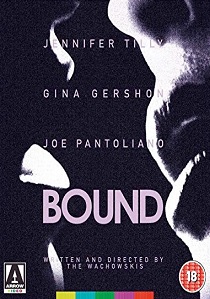 Before making their name with worldwide smash hit The Matrix and its two sequels (which they similarly wrote and directed), sibling duo The Wachowskis debuted with the sizzling neo-noir thriller Bound financed by legendary Italian producer Dino De Laurentiis.

Gina Gershon (Showgirls, Face/Off) plays Corky, a young woman recently released from a five-year jail term for, as she puts it, the "redistribution of wealth". After a brief lift encounter with her sexy and sultry neighbour Violet (Jennifer Tilly) the pair strike up a steamy love affair under the nose of Violet's unhinged Mafia boyfriend Caesar (Joe Pantoliano). Soon the two women are hatching a plot to steal $2 million from Caesar and his associates - but if you're going to mess with the mob, you'd better be sure you do it right...

Hugely well received upon its release, reviews for Bound saw some critics comparing the Wachowskis with the Coen Brothers - and Blood Simple in particular - whilst Roger Ebert heaped praise on the film, declaring it to be "one of those movies that works you up, wrings you out and leaves you gasping". By turns shocking and funny (and with plenty of lesbian sex scenes thrown in for good measure) Bound is an astoundingly assured debut which oozes style and sensuality.

Destined for cult status, Bound is released on dual format DVD and Blu-Ray by Arrow Films on 14th July 2014.

DVD
The BAFTA-winning hit Unforgotten, released on DVD 26th April 2021 from BBC Worldwide, returns for a fourth series, as Cassie and Sunny investigate a cold case with alarming links to the police force. END_OF_DOCUMENT_TOKEN_TO_BE_REPLACED
Top PicksView