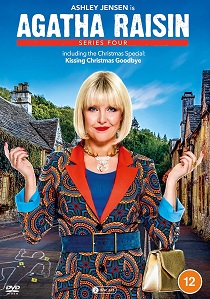 Based on the best-selling novels by the late M.C. Beaton, the fourth series of Agatha Raisin along with Agatha Raisin: Complete Series Four and One - Four Box Set including the Christmas Special: Kissing Christmas Goodbye arrives on DVD and digital 6th June 2022 from Acorn Media International.

Four series on and the Agatha Raisin detective agency continues to thrive, and there's no shortage of mysteries for the savvy sleuth to solve. Resolving not to spend any more time dwelling on her AWOL on-off partner, James (Jamie Glover - Waterloo Road), Agatha and her merry band of helpers have more cases to crack including a jam competition that spirals into a sticky mess when a judge is mysteriously murdered - Wilkes (Jason Barnett, Bridgerton) hires our favourite formidable PI to keep a lid on things.

When James whisks Agatha away on a seaside trip to work on his new book, the last thing she expects is to end up in Snoth-on-Sea and be suspected of murder once again. And in an even more shocking turn of events, she's called in to investigate when her ex-fiancé's fiancée is murdered the night before their wedding...

HotDVDBDDIGITAL
With stunning revelations, glamorous journeys, and the arrival of the Jazz Age, Downton Abbey: A New Era, released on DVD and Blu-ray 15th August 2022 from Warner Home Video, will be the Crawleys' biggest adventure yet as they grapple with their future and new intrigue about ... END_OF_DOCUMENT_TOKEN_TO_BE_REPLACED
Top PicksView