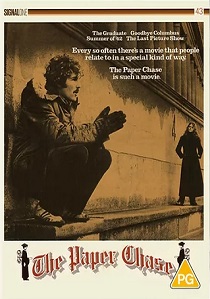 Timothy Bottoms stars in this powerful, moving story of a first-year Harvard Law School student who comes to terms with his dreams in America's most competitive school.

Serious and hard-working, Hart (Bottoms) finds he must survive much more than the pressures, all-night cramming, and insecurities he expected. He becomes the fearful adversary of Knightsfield, the school's most imperious, witheringly sarcastic yet brilliant professor (John Houseman in an Oscar® winning role).

Terrorising some, inspiring others, the professor easily separates the men from the boys by the time the term is over. Hart's personal relationship with Knightsfield grows more complex when he discovers the girl he's fallen in love with is the professor's daughter (Lindsay Wagner).

The Paper Chase is released on dual-format DVD and Blu-ray 13th June 2022 from Signal One Entertainment.