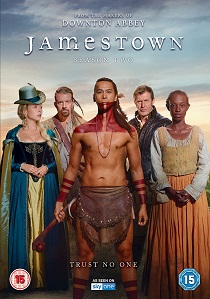 We return to Jamestown, a 17th Century English settlement on the edge of the breathtaking but untamed Virginian wilderness.

This second season sees the tobacco plantations provide the wealth they promised but the status quo will soon be disrupted by births, deaths and broken marriages. Our pioneering settlers find themselves at the heart of adventure once more as new arrivals attempt to find their place in this foreign land. Relationships with the Native peoples afford some great influence in the town but no man, or woman, is going to give up their share of the Virginian riches without a fight.

Jamestown, released on DVD 30th April 2018 from Universal Pictures (UK), returns for another season of dazzling ventures in love, war and diplomacy. Making a home in the New World is a dirty business, can our colonists keep their consciences clean...

HotUHD
Say the 'B' word three times and have a wonderful Day-O as Tim Burton's Beetlejuice arrives for the first time on 4K UHD 31st August 2020 from Warner Home Video. END_OF_DOCUMENT_TOKEN_TO_BE_REPLACED
Top PicksView