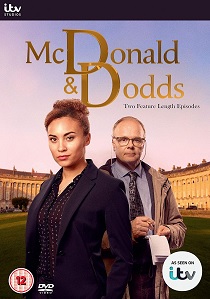 Detectives DCI McDonald and DS Dodds, who seemingly have nothing in common, are thrown together and forge a rumbustious friendship and an entertaining partnership in the mini-series McDonald & Dodds, out on DVD on 16th March 2020 and also available on Digital Download.

Newly arrived in Bath, highly ambitious Londoner DCI McDonald (Tala Gouveia) intends to take the city's police force by storm. When she's partnered with veteran Sergeant Dodds (Jason Watkins), the unlikely pair must find a way to work together as their different approaches to policing - and to life - come to the fore. Together, they investigate intriguing crimes set against the backdrop of the contemporary changing face of Britain's most traditional city.

From the secret lives of the rich and entitled, to the undercover world of addiction clinics, McDonald & Dodds come to realise not all is as it seems in the seemingly sleepy city.

UHD
In Yesterday, released on DVD, Blu-ray and 4K UHD 4th November 2019 from Universal Pictures (UK), a struggling musician realises he's the only person on Earth who can remember The Beatles after waking ... END_OF_DOCUMENT_TOKEN_TO_BE_REPLACED
Hot PicksView