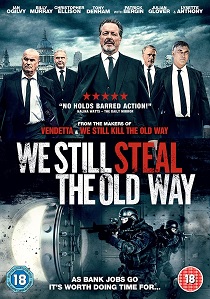 The Archer gang return in We Still Steal The Old Way, the follow-up to the hit crime thriller We Still Kill The Old Way, as Ian Ogilvy and an all-star cast of old school criminals attempt to pull off an audacious robbery... in order to get themselves thrown into prison.

Halfway through the heist, the gang get caught, and they're sent down. So far, so good - now they're in prison they can put into motion their plot to spring fellow inmate George, who desperately needs to get out before his wife dies. Trouble arises when Richie's arch enemy Vic Farrow gets himself transferred into the prison, wanting to settle some old scores.

Directed by the first film's Sacha Bennett (Bonded by Blood), and produced by Jonathan Sothcott (Vendetta), We Still Steal The Old Way harks back to classic Brit crime capers like Perfect Friday and Robbery, but brought bang up to date by drawing its inspiration from the audacious 2015 Hatton Garden jewellry heist, and taking a timely jab at banking bigwigs.

Delivering two films for the price of one (a prison break and a heist movie rolled into one), We Still Steal The Old Way crackles with wide boy banter, nifty twists and terrific set pieces.

Related Articles
Tango One, Outside Bet, Bonded by Blood
Bonded By Blood 2: The New Generation, King of Crime
Freight, Nemesis, Rise Of The Footsoldier: Origins
Patriot Games
LEGO Star Wars: The Empire Strikes Out, Airborne, Quatermass and the Pit, For Your Eyes Only
Comments
Hot Pick

HotUHD
After moving to a new town, two brothers discover that the area is a haven for vampires as the classic The Lost Boys is released on 4K UHD 20th September 2022 from Warner Home Video. END_OF_DOCUMENT_TOKEN_TO_BE_REPLACED
Top PicksView