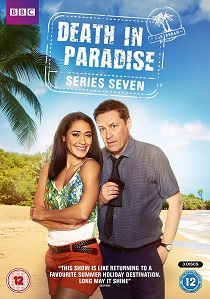 Filmed on the French-Caribbean island of Guadeloupe, award-winning drama Death In Paradise returns to DVD for a seventh series. Pulling in a record audience of over nine million last year, Death In Paradise has cemented its position as one of BBC One's highest rating dramas, with Ardal O'Hanlon reprising his role as Detective Inspector Jack Mooney.

Jack Mooney is starting to settle in the sun-soaked island of Saint-Marie - but he has some impossible mysteries to solve. Jack's laconic style belies a sharp mind and relentless determination. He's a brilliant detective, and he'll need all his instinctive genius to solve these perplexing murders.

Death In Paradise is released 26th February 2018 from BBC Worldwide.

UHD
Disney and Pixar's original feature film Luca, released on DVD, Blu-ray and 4K UHD on 23rd August 2021, is a fun and heartwarming story about friendship, stepping out of your comfort zone and two teenage sea monsters who ... END_OF_DOCUMENT_TOKEN_TO_BE_REPLACED
Top PicksView