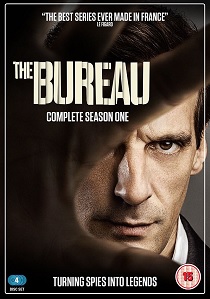 Arrow Films is pleased to announce the DVD Box Set release of the French political thriller The Bureau on 16th January 2017.

Upon the return of one of the DGSE's top agents, Guillaume Debailly aka Malotru (Mathieu Kassovitz), after a six-year undercover mission in Syria, the department gets hit with a major crisis: An undercover agent goes mysteriously missing in Algeria.

Additionally, The Bureau must also maintain a close eye on promising new recruit, Marina (Sara Giraudeau), who needs to complete a full test of her abilities before infiltrating Iranian nuclear activity.

The many lives Malotru has led as an undercover agent are now beginning to haunt him. When he discovers Nadia (Zineb Triki), the love of his life is in Paris, he breaks The Bureau's number one rule and secretly continues to live by his previous legend in order to reunite with her.

For love, Malotru is willing to risk it all - not only for himself, but the entire Bureau.

BD
Stuck in a meaningless job and drowning in the alcoholism that cost him his marriage, Jack Cunningham is asked to coach the basketball team at his alma mater, in Finding The Way Back is released on ... END_OF_DOCUMENT_TOKEN_TO_BE_REPLACED
Hot PicksView