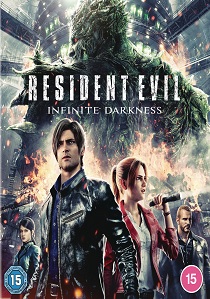 In 2006, American federal agent Leon S. Kennedy is invited to the White House to investigate a hacking incident. During the investigation, he encounters a horde of zombies in a mysterious attack against the President. Meanwhile, TerraSave staff member Claire Redfield uncovers a strange image drawn by a young boy in a country she visited.

Haunted by this drawing, which appears to be of a victim of viral infection, Claire starts her own investigation. Claire visits the White House and has a chance reunion with Leon. Together, Leon and Claire investigate the connection between the White House attack and strange drawing and uncover a threat that will shake the nation to its very core.

UHD
The world's most lethal odd couple - bodyguard Michael Bryce and hitman Darius Kincaid - are back on another life-threatening mission as The Hitman's Wife's Bodyguard arrives on DVD, Blu-ray and 4K UHD 6th September 2021 from ... END_OF_DOCUMENT_TOKEN_TO_BE_REPLACED
Top PicksView