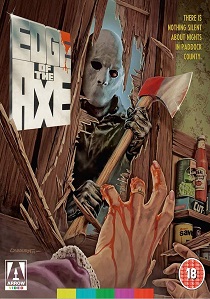 The rural community of Paddock County is being rocked by the crazed exploits of an axe-wielding psychopath, who stalks the night in a black trenchcoat and mask. As the victims pile up, the authorities attempt to keep a lid on the situation, whilst computer whizz-kid Gerald and girlfriend Lillian seek to unmask the killer before the town population reaches zero.

Nominally set in Northern California but shot primarily in Madrid, giving the film an off-kilter, American/European atmosphere akin to the likes of Pieces, Edge of the Axe is a late entry hack-and-slash masterpiece from one of the titans of Spanish terror.

Edge of the Axe is released on Blu-ray 27th January 2020 from Arrow Video.

HotDVDBDUHD
The saga of Michael Myers and Laurie Strode continues in the next thrilling chapter of the Halloween series as Halloween Kills arrives on DVD, Blu-ray and 4K UHD 17th January 2022 from Universal Pictures (UK). END_OF_DOCUMENT_TOKEN_TO_BE_REPLACED
Top PicksView