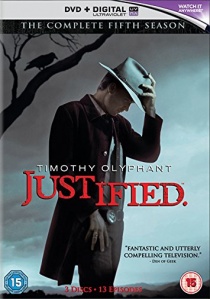 The Emmy Award-winning Justified returns for its fifth season with Dewey Crowe heading north to invest a $300,000 settlement from the Marshals Service in a brothel owned by Boyd Crowder (Walton Goggins), but it isn't long before his cousin Daryl Jr. and the rest of their Florida crime family arrive to cash in, too. As Daryl looks to consolidate the business in Harlan, Boyd's efforts to help Ava (Joelle Carter) fix her murder trial run aground, forcing him to reach out to ruthless crime bosses from Lexington, Detroit, and even Canada and Mexico.

With the Crowes complicating life in Harlan, Boyd enters into a series of ill-fated alliances that threaten to bring him down and expose Raylan Givens' (Timothy Olyphant) involvement in a mobster's questionable death. With Raylan's future in doubt, a revenge attack catches Art (Nick Searcy) in its crosshairs, unleashing a federal investigation that throws the Crowes into turmoil and puts Boyd on a collision course with the law.