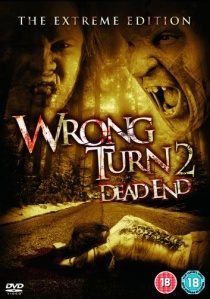 The ultimate reality show turns into the ultimate horror for six contestants when they find themselves pitted against hideously deformed and insatiably hungry cannibals in this white knuckle thrill-ride. Directed by Joe Lynch, recently named one of Gorezone's top horror directors, The Extreme Edition of Wrong Turn 2: Dead End is released to buy and rent on DVD on 7th January 2008 from Twentieth Century Fox Home Entertainment.

The Extreme Edition sees maximum carnage with even more blood, guts and action than the original version and is a must-see for all horror fans! Taking place immediately after the first Wrong Turn movie, the sequel centres around a group of six contestants who are thrown together for six days in a simulated post-apocalyptic wasteland due to their participation in a reality TV show hosted by former marine Dale Murphy (Henry Rollins; Feast, A House on a Hill), in which the winner will walk away with $100,000. Located in a remote part of West Virginia, the contestants soon discover that what they are really fighting for is their survival - against a family of inbred cannibals who plan to ruthlessly butcher them all... who will survive?

Dare to go deeper into the woods with hours of gore-thirsty special features including two audio commentaries, a 'making of' featurette, a special effects featurette and two Easter eggs. Previously unreleased in UK cinemas, don't miss out on your chance to see the ultimate version of the most blood-thirsty horror flick to hit DVD this year! Fans of the original Wrong Turn movie can pick up a two-disc DVD double-pack containing both films, also released to buy on 7th January.