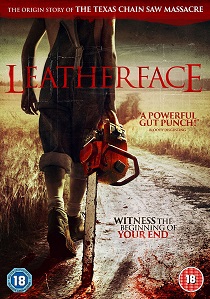 From the directors of the extreme French masterpiece Inside, the maniac is unmasked in Leatherface, the gory, nerve-shattering prequel to the legendary classic The Texas Chain Saw Massacre, released on DVD 8th January 2018 from Lionsgate Home Entertainment.

A young nurse is kidnapped by four violent teens after they escape from a psychiatric hospital, and take her on a road trip to hell. Pursued by an equally deranged, trigger-happy lawman out for revenge, one of these teens is destined for tragedy and horrors that will destroy his mind - moulding him into the monster we now know as Leatherface.

When the original The Texas Chain Saw Massacre burst onto the screen in 1974, a new horror legend was born, in the form of a mumbling, bumbling, flesh-masked, chainsaw wielding maniac - Leatherface! Seven films and untold gruesome deaths later, audiences can finally find out who lurks behind the mask - and how he got there, in this stylish, scary and blood-soaked prequel.

The directors - masters of horror Alexandre Bustillo and Julien Maury - are a perfect fit for the material, having shocked audiences with their 2007 gory Gallic debut Inside, described by Twitch as 'one of the harshest, most brutal and disturbing things to hit celluloid in recent years'.

Here, the pair deliver brooding menace and nightmarish psychological horror, all the while ratcheting up the tension to the ninth degree.

With a fantastic cast - including genre favourites Stephen Dorff (Blade) and Lili Taylor (The Conjuring), as well as Game of Thrones star Finn Jones - this is a worthy addition to the Chain Saw franchise, and a thrilling examination of the genesis of a monster who is ranked alongside Freddy and Jason as one of the greatest horror characters ever.

DVD
The end of the line is only the beginning in a wild, non-stop thrill ride through modern-day Japan as Bullet Train is released on DVD, Blu-ray and 4K UHD 24th October 2022 from Sony Pictures Home Entertainment END_OF_DOCUMENT_TOKEN_TO_BE_REPLACED
Top PicksView