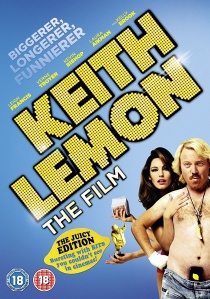 Ooosh, bang tidy! Get ready for the all-new, uncut, lewderer, cruderer and ruderer comedy of the year as Keith Lemon: The Film rolls onto Blu-ray and DVD on 10th December 2012 from Lionsgate Home Entertainment.

The 'legendary' businessman Keith Lemon makes his movie debut in Keith Lemon: The Film, a rags to riches story with a twist as Leeds' finest becomes an all-conquering business mogul thanks to a spur of the moment idea and a coach-load of mobile phones. With fame and fortune beckoning, our hero is led astray by his own greed and a lifelong dream to smash Kelly Brook's back doors in - but can he pull himself together in time to save those he loves?

With a cast that reads like a who's who of popular British celebrity, including appearances from Kelly Brook, Verne Troyer, Fearne Cotton, Gary Barlow, Paddy McGuiness and various Spice Girls, Keith Lemon: The Film is a breathless love song to British toilet humour at its finest. With so much unseen stuff that wasn't allowed in the cinemas, and bursting with juicy special features, this extended DVD will have you shipped off to the hospital with your sides splitting. Get ready to laugh your pants off.

Keith Lemon: The Film is the perfect stocking filler this festive season - just don't watch it with your grandparents!