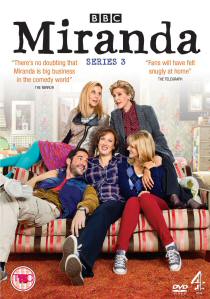 Queen of Comedy, Miranda Hart's hilarious, multi-award winning sitcom is now available to own and boy was it worth the wait as Miranda Series 3 DVD and the 1-3 boxset is released from 4th November 2013, courtesy of Channel 4 DVD.

Miranda Hart, one of the nation's favourite comedians, and her hugely popular sitcom is finally available to own on DVD from 4th November 2013 along with the series 1-3 boxset. Also starring Stevie Sutton (Sarah Hadland), Gary Preston (Tom Ellis), Penny (Patricia Hodge), Tilly (Sally Phillips), Clive Evans (James Holmes), Michael Jackford (Bo Poraj), and Rose (Naomi Bentley), this DVD and boxset is the perfect treat for yourself or someone special this Christmas.

In Series 3, Miranda is faced with some big dilemmas. It's touch and go for her beloved joke shop, and we are forced to wait and see if this comedy hub, where Miranda's magic gaffes and many calamities are played out, manages to stay open for business. Things aren't looking good for Miranda's on-off-on-off relationship with gorgeous Gary (Tom Ellis) either. A dodgy date with local news reader Mike (Bo Poraj) (who later calls himself her boyfriend) proves potentially disastrous, and her 'true love' Gary meets newcomer Rose (Naomi Bentley).

Miranda's world is further turned upside down when she's dazzled by a cameo appearance from none other than Take That's Gary Barlow! This one off appearance definitely doesn't disappoint with Gary Barlow and Miranda sharing a kiss! And if that wasn't enough, real life Michelin starred Raymond Blanc also pops up in series 3, continually harassed where ever he goes by Miranda's overbearing mother Penny (Patricia Hodge).

Miranda Hart's first excursion to the Edinburgh Festival in 1994 began her journey to become one of the top comedians. After ten years on the stand-up and sketch club circuit, Miranda went on to make her mark appearing in shows including Smack the Pony, Absolutely Fabulous, Hyperdrive and Not Going Out, but it was when her sitcom Miranda hit our screens in 2009, that her popularity really rocketed.

Miranda has since been crowned the Queen of Comedy at the British Comedy Awards winning three comedy awards, three RTS Awards and has been nominated for four TV BAFTAs for the past two series. In 2012, Miranda appeared in her first straight acting role in the highly popular BBC/ABC drama Call the Midwife a role which has gone on to win her a National Television Award for Best Drama Performance. The third series of Miranda aired at the end of 2012, with Miranda nominated in the Female Performance in a Comedy Programme category at this year's BAFTA Television Awards. 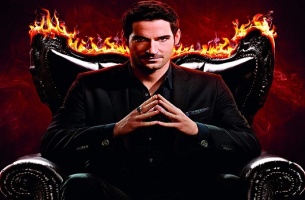 HotDVDTVBoxset
Put on your devilish grin. The eternal wait is over as Warner Home Video brings you Lucifer: The Complete Third Season on DVD on 3rd September 2018. END_OF_DOCUMENT_TOKEN_TO_BE_REPLACED
Comments
Hot Pick

HotDVDBD
From the producers of Nobody and John Wick comes a bare-knuckle, coal-dark holiday action-comedy that says you should always bet on red as Violent Night sledges in on DVD and Blu-ray 6th March 2023 from Warner Home Video. END_OF_DOCUMENT_TOKEN_TO_BE_REPLACED
Top PicksView