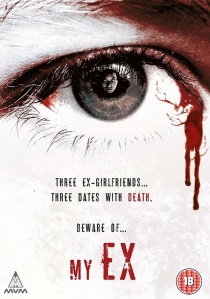 Shahkrit Yamnarm (Bangkok Dangerous) stars in My Ex, released on DVD by MVM on 8th October 2012, the chilling story of deceit, lust and vengeance unfolded within the Thai horror-thriller genre. An exhilarating combination of the supernatural and unsettling revenge story against a back drop of a dark yet beautiful setting, My Ex makes Fatal Attraction look tame in comparison.

As a young, popular actor, Ken's life is broadcasted across gossip magazines and tabloids, with his love life in particular being heavily scrutinized. Determined not to be tied down to one girl, Ken proves he is not the monogamous type, leaving a trail of heartache behind him.

After unofficially leaving his two previous lovers, Meen and Bow, Ken starts dating his co-star Ploy, much to the fury of Meen and heartbreak of Bow. Having his love affairs leaked to gossip columnists, things start to turn sinister and disturbing for Ken and Ploy alike. Someone or something shadows their every move; invading their privacy, haunting their thoughts and plaguing their nightmares.

With the paparazzi also on Ken's tail, the extent of his lies and deceit become unraveled through a series of scandalous photos, but also reveal something far darker at play.

Ken's problems escalate further after retreating to his holiday house. This someone or something is clearly bloodthirsty for revenge, determined to destroy Ken's life, ensnaring others along the way and leaving a trail of murderous destruction behind.