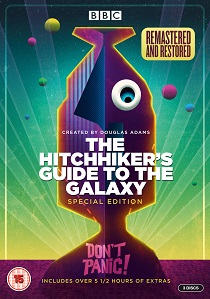 The Hitchhiker's Guide To The Galaxy: Special Edition (1981)

NewsTV SeriesScience FictionComedyBBC
News Article Go back to homepage
BBC Worldwide is pleased to announce that the 1981 TV adaption of The Hitchhiker's Guide to the Galaxy will be re-released on the 1st October 2018 on DVD and Blu-ray, remastered and up-scaled and with a wealth of new bonus content for fans to enjoy.
Martin Benson, Richard Vernon, Aubrey Morris, Mark Wing-Davey, David Dixon, Joe Melia, Peter Davison, Sandra Dickinson, Geoffrey Beevers, Steve Conway, Simon Jones, Dave Prowse
Alan J.W. Bell
BBC Worldwide
3 hours 19 minutes
01/10/2018
#TheHitchhikersGuideToTheGalaxy
Thank you for supporting DVD365.net when you order using the link(s) below. As an Amazon Associate we earn from qualifying purchases
Buy DVD
Buy BD
Information

BBC Worldwide is pleased to announce that the 1981 TV adaption of The Hitchhiker's Guide to the Galaxy will be re-released on the 1st October 2018 on DVD and Blu-ray, remastered and up-scaled and with a wealth of new bonus content for fans to enjoy.

The release comes in two formats, the first a Special Edition in both Blu-ray and DVD, and the second a Collector's Edition Blu-ray that comes in retro VHS-style packaging and includes a collector's art card as well as a 24-page behind-the-scenes booklet written by producer Kevin Jon Davies. Both formats contain a wealth of new bonus content listed below

Unbeknownst to its inhabitants, Earth is to be demolished to make way for an intergalactic highway. Arthur Dent (Simon Jones), an unassuming Englishman, is whisked off the planet to safety by his alien friend Ford Prefect (David Dixon), and launched on a dizzying journey through space and time (with only a towel, and a fish to help them) to discover the meaning of life itself.