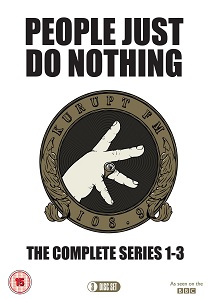 Throw your Ks up because, some 14 years after they made their debut on underground pirate station Kurupt FM, DJ Beats, MC Grindah and the rest of the crew are going mainstream as they arrive on DVD for the first time ever.

The spoof reality show about a West London pirate radio station has become a comedy sensation, and follows Beats and Grindah, manager Chabuddy G, Steves and Decoy as they run the station, record tracks, put on raves and deal with their daily lives and loves.

Led by self-proclaimed garage legend MC Grindah and his second in command DJ Beats, these hapless individuals share the secrets behind running an illegal business and demonstrate that chasing your dreams is actually a full time job.

The Kurupt FM massive have been busy playing countless festivals and raves this summer ahead of the launch of the third season which is currently airing on BBC Three and BBC Two.

Following its run on BBC Three, BBC Two and iPlayer 'get out the way' as People Just Do Nothing Complete Series 1 - 3 hits DVD on 24th October 2016 thanks to Dazzler Media.

HotDVDBD3D-BDUHD
The producers of Godzilla reimagine the origins of one the most powerful monster myths of all in Kong: Skull Island, released on DVD, Blu-ray, 3D Blu-ray and UHD on 24th July 2017 from Warner Home Video. END_OF_DOCUMENT_TOKEN_TO_BE_REPLACED
Top PicksView