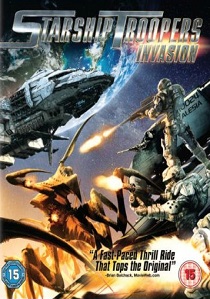 The Troopers are back in action in the all-new CGI-animated adventure Starship Troopers: Invasion, landing on Blu-ray and DVD on 27th August 2012 from Sony Pictures Home Entertainment. With the latest in CGI technology, the next chapter in the beloved sci-fi franchise finds fan favorites Johnny Rico, Captain Ibanez and Carl Jenkins on a perilous mission to rescue survivors of a Federation outpost under attack by the bugs.

The Starship Troopers: Invasion Blu-ray and DVD come armed with hours of explosive bonus features, including filmmakers commentary, deleted scenes and an 11-part Making Of featurette, revealing how the movie was made, using a breakthrough mix of animation, motion capture and compositing. As an added bonus to fans, the Blu-ray also features an exclusive Conceptual Art Gallery, showcasing the original designs of the movie's ships, alien bugs and more.

The troopers of two starships have joined forces to terminate a massive bug attack at a federation outpost. Before the mission can be completed and the survivors evacuated, one ship abruptly departs and goes inexplicably dark. The remaining battle-hardened troopers race to the rescue, only to discover that the threat from the bugs is about to hit home.

BD
A detective in a small Pennsylvania town investigates a local murder while trying to keep her life from falling apart in Mare of Easttown, released on DVD and Blu-ray 13th September 2021 from Warner ... END_OF_DOCUMENT_TOKEN_TO_BE_REPLACED
Top PicksView