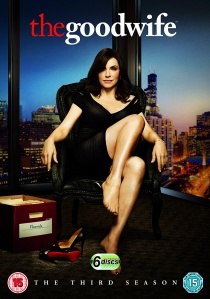 More politically charged and scandalous than ever, the critically acclaimed legal drama The Good Wife returns with the release of The Good Wife - The Third Season on DVD on 27th August 2012 from Paramount Home Entertainment.

Headlined by Julianna Margulies in her Emmy® and Golden Globe® award-winning role, The Good Wife - The Third Season not only includes 22 must-watch episodes, but is packed with bonus features providing a rare, inside look at the creation of the celebrated drama.

Margulies stars as Alicia Florrick, a wife and mother who assumes full responsibility for her family and re-enters the workforce after her husband's (Chris Noth) very public sex and political corruption scandal. The third season of the series continues with Alicia struggling to balance her professional and personal lives as she strives to provide a stable home for her children. In the midst of her ongoing professional challenges, she faces potential divorce from her husband and contemplates finally giving in to her feelings for fellow lawyer Will Gardner (Josh Charles).

Including special features such as "Research & Development", viewers are able to follow creators and executive producers Robert and Michelle King through their writing process as they find inspiration from current events and newsmakers. Shot in New York, but with pre- and post-production work done in Los Angeles, the filming of The Good Wife comes with its own unique challenges and the behind-the-scenes feature "A Bi-Coastal Affair" takes viewers inside the making of the series and gives them a chance to watch as the Kings and executive producer David Zucker, in Los Angeles, coordinate in real time with their team across the country led by executive producer Brooke Kennedy.

DVD
The end of the line is only the beginning in a wild, non-stop thrill ride through modern-day Japan as Bullet Train is released on DVD, Blu-ray and 4K UHD 24th October 2022 from Sony Pictures Home Entertainment END_OF_DOCUMENT_TOKEN_TO_BE_REPLACED
Top PicksView