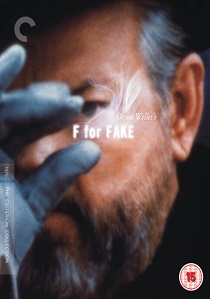 Trickery. Deceit. Magic. In F for Fake, a free-form documentary by Orson Welles (Citizen Kane), the legendary filmmaker (and self-described charlatan) gleefully re-engages with the central preoccupation of his career: the tenuous line between illusion and truth, art and lies.

Beginning with portraits of the world-renowned art forger Elmyr de Hory and his equally devious biographer, Clifford Irving, Welles embarks on a dizzying journey that simultaneously exposes and revels in fakery and fakers of all stripes-not the least of whom is Welles himself.

Charming and inventive, F for Fake, released on Blu-ray 30th July 2018 as part of the Criterion Collection by Sony Pictures Home Entertainment, is an inspired prank and a clever examination of the essential duplicity of cinema.

UHD
Ryan Reynolds stars in this action-packed comedy as a bank teller who discovers he is actually a background player in an open world video game in Free Guy, arriving on DVD, Blu-ray and 4K UHD 4th October 2021 from Walt Disney ... END_OF_DOCUMENT_TOKEN_TO_BE_REPLACED
Top PicksView