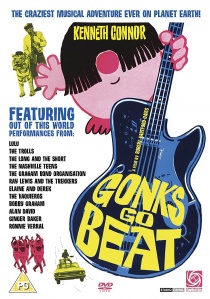 News
News Article Go back to homepage
As of 4th June 2007, Optimum Releasing released three Poptastic 60s Musical Classics; John Boorman's Catch Us If You Can, the Sixties version of Shakespeare's Romeo and Juliet Gonks Go Beat and the long-lost pop gem Pop Gear.
StudioCanal
1 hour 28 minutes
04/07/2007
Thank you for supporting DVD365.net when you order using the link(s) below. As an Amazon Associate we earn from qualifying purchases
Buy DVD
Information

John Boorman makes his directorial debut with this 1960s cult classic in which Dave Clark stars as a stuntman who gives up the rat-race to see the real world, along with his four friends (played by the Dave Clark Five Band).

On his travels he picks up a pretty model who's also sick of the humdrum, money driven world of advertising and decides to come along for the ride. On a sunny island they mix with beatniks and society hipsters while singing classics beat hits during a wild weekend, as agents, ad men and the national press try to catch them... if they can. A UK DVD Premiere.

A Sixties version of Shakespeare's Romeo and Juliet that you never expected. The Montagues and Capulets are here rival musical communities, divided by whether they love ballads or rock. Forbidden love between a couple from either side brings hope for peace.

Featuring a host of 60s Beat groups including Elaine and Derek, Lulu and the Luvvers, The Long and the Short, The Nashville Teens, Ray Lewis and the Trekkers, The Graham Bond Organisation, Bobby Graham, Alan David, Ginger Baker, Ronnie Verral, The Trolls, The Vaquieros and, erm, some furry puppets called the Gonks. A UK premiere.

This long-lost pop gem features many of the bands that made up the British Invasion in 1964, book-ended by the Beatles and hosted by the ultimate 60s pop icon himself, Sir Jimmy Savile. A UK Premiere.

UHD
Pixar Animation Studios serves up a breakthrough comedy with something for everyone as Ratatouille arrives for the first time on 4K Ultra HD 26th July 2021, exclusive to Zavvi. END_OF_DOCUMENT_TOKEN_TO_BE_REPLACED
Top PicksView