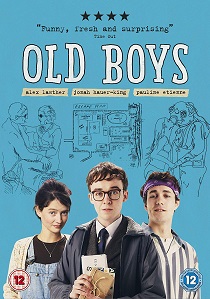 Survival of the fittest is the philosophy at all boys boarding school Caldermount. If you're not a champion on the sports field, you're a nobody.

No one knows this better than bookworm Amberson (Alex Lawther), who's been at the bottom of the social ladder since he can remember. When the French teacher's fiery daughter Agnes arrives, Amberson's life is turned upside down. He suddenly finds himself playing matchmaker for Winchester, the school's handsome but spectacularly dim school-hero. Winchester definitely has the looks to win over Agnes but it's Amberson who has the wits.

Will Amberson have the courage to reveal himself to her and stand up for who he really is?

HotUHD
Let an awesome journey unlike any other begin as Stanley Kubrick's dazzling 2001: A Space Odyssey is released on 4K UHD 22nd February 2021 from Warner Home Video. END_OF_DOCUMENT_TOKEN_TO_BE_REPLACED
Hot PicksView