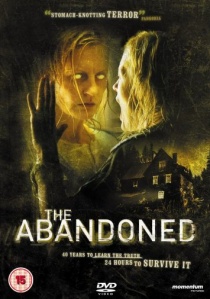 Death never runs out of time, especially in The Abandoned, a bloody tale that raises the bar for haunted house horror with its shocking story, extremely high production values and excellent direction and cinematography. Set for DVD release on 19th May 2008 courtesy of Momentum Pictures, The Abandoned is a metaphysical Spanish horror film from Nacho Cerdà, and most certainly not your normal run of the mill slasher-of-the-week fare.

Featuring stunning performances from its great cast headed by Karel Roden (The Bourne Supremacy, Hellboy, Blade 2) and Anastasia Hille (The Hole), The Abandoned pushes the haunted-house movie into an abstract realm where the past and present fold into each other.

Superbly crafted by Cerdà and his first-rate cinematographer Xavier Giménez (Intacto, The Machinist), this is a rare horror film that moves from the real world into a kind of psychic space, and slowly suffocates its characters inside their own heads.

Have you got what it takes to watch this stunning and intriguing film?

Marie returns to her homeland, Russia, where her mother's dead body has been found under bizarre circumstances. She never knew her, having been adopted and brought to America as a baby. The only clue as to what might have happened is an isolated, abandoned farm in the mountains that supposedly belonged to her natural parents. Being the only next of kin, she inherits the place, but no one will take her there as the local superstitions state that the area is...DAMNED.

A cycle of horror comes to fruition, as she learns the real reason she has been summoned for this perverse reunion with her past... And the brutal secret behind her family.

DVD
The globally renowned Len Deighton novel The Ipcress File, the first in the Harry Palmer series, has been adapted into a six-part series and is released on DVD 18th April 2022 from ITV Studios Home Entertainment. END_OF_DOCUMENT_TOKEN_TO_BE_REPLACED
Top PicksView