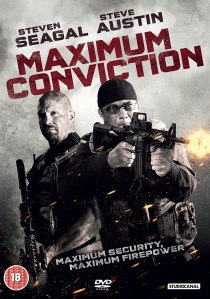 Still a serious contender for the crown of the King of Action, Hollywood's toughest hero Steven Seagal is back in Maximum Conviction, released on DVD and Blu-Ray by StudioCanal on 18th March 2013.

Having taken on more villains in his legendary career than Stallone, Statham and Schwarzenegger combined, martial arts master Seagal is back for his most action-packed mission yet that boasts maximum hand-to-hand combat, maximum body count and maximum on-screen bad-ass!

As one final mission before their retirement, former Black Ops soldier Cross (Steven Seagal - Under Siege; Hard To Kill; Machete) and his partner Manning (Steve Austin - The Expendables; WWF; The Longest Yard) are assigned the task of decommissioning an old military prison and safely transport all the detainees to a different site. Before doing so, they must firstly oversee the mysterious arrival of two high-security female prisoners that pose a potential risk to the safe-running of the operation.

Before long an elite force of mercenaries' descend into the prison in search of the new arrivals and Cross suddenly finds himself thrown into a frenzied fight for survival. A man of strong values who adheres to the completion of all missions he is assigned, Cross assembles a hard-knock team of experts to take down the mercenaries before they get to the female arrivals.

Plagued with the additional threat of the extremely dangerous prisoners that roam the corridors, Cross must utilise the skills he gained during the Special Forces and take down the guerrilla soldiers before it costs him his life. As the true identities of the women are revealed though, Cross realizes he's caught in the middle of something far bigger than he had imagined.

UHD
Will Smith and Martin Lawrence are back on the case in the roles that launched the dynamic duo to global superstardom in Bad Boys For Life, arriving on DVD, Blu-ray and 4K UHD 25th May 2020 from Sony ... END_OF_DOCUMENT_TOKEN_TO_BE_REPLACED
Hot PicksView

From the 1870s through to modern day, Radioactive is a journey through Marie Curie's (Rosamund Pike) enduring legacies - her passionate partnerships, scientific breakthroughs, and the consequences that follow.
Movie quote