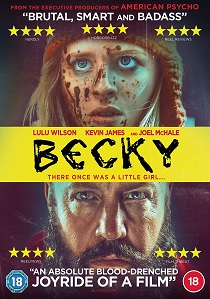 Rebellious 13-year-old, Becky, accompanies her father on a weekend getaway to a lake house in an effort to try and reconnect after her mother's death. But the trip soon takes a turn for the worse when a group of convicts on the run, led by the merciless Dominick, suddenly invade the house. With her father's life at stake, Becky, not daddy's little girl anymore, decides to take matters into her own hands.

A blood-splattered home invasion thriller with a twist from the directing team behind Bushwick and Cooties and the Executive Producers of American Psycho and Gotti, Becky stars Lulu Wilson (Annabelle: Creation, The Haunting of Hill House), Primetime Emmy Award nominee Kevin James (The King of Queens) and Joel McHale (Ted, Deliver Us From Evil, The Happytime Murders).

Becky is released on DVD 11th January 2021 from Vertigo Releasing.

UHD
07/04/2021
With the help of a magic ticket, a young movie fan is transported into the fictional world of his favourite action movie character in Last Action Hero, released on 4K UHD for the first time 17th May ...