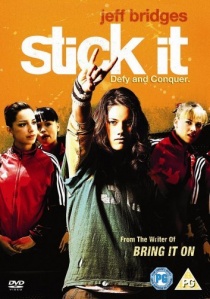 Packed with attitude, energy and exhausting gymnastics routines, Stick It spectacularly tumbles onto DVD on 12th February 2007 from Buena Vista Home Entertainment and is sure to take the teen world by storm. After a string of run-ins with the law rebellious teen, Haley Graham (Missy Peregrym), is forced to return to the competitive world of gymnastics. It's her ultimate nightmare come true as she's forced to swap BMXs, boys and trouble for the heady heights of the high beam.

A fun, fast paced film about tearing up the rulebook, forging friendships and shaking up the gymnastics world, Stick It shows what can happen when you take matters into you own hands to overcome the odds. Written and directed by hot young talent Jessica Bendinger (Bring It On, Sex and the City), Stick It charts the punishing fitness schedule Haley must follow to gain a place at the National Championships for a second time.

Surprising herself with self-discipline, she discovers an unexpected ally in the form of her new coach, Burt Vickerman (Jeff Bridges) and begins to make friends within the cliquey academy. But not all is as it seems, the coach has struck a deal and Hayley finds herself fighting for her place at the Championships.

Things take a turn for the worst as she finds out the only person who believes in her could have ulterior motives - but can their friendship survive? Together with crazy, skater friends Frank and Poot, Haley turns the gymnastic world on its head with her rebellious ways and edgy rule-breaking routines, leaving the stuffy judges lost for words.

Injecting a serious amount of street-cred into gymnastics, Stick It is a fantastically feisty, funny film with a powerful storyline that will keep teens and tweens hooked. With show-stopping routines from a cast of fresh talent, a great soundtrack and dazzling acrobatic performances, Stick It is an explosive teen drama that will reinvent the sport when the DVD takes to the floor this February.

After walking out on her team mates at the gymnastics championships two years before, the talented but rebellious Haley Graham is forced to return to the rigid world of rules, catfights and Lycra. Her in-your-face attitude quickly collides with her hard-nosed coach and team mates.

But as her love of sport resurfaces, Haley slowly earns their respect by doing what she does best - tearing up the rulebook. In this process, she learns there are more valuable things to win in life than medals and ribbons.