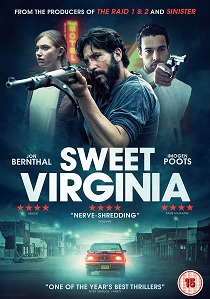 NewsDramaThrillerImogen Poots
News Article Go back to homepage
Sweet Virginia, released on DVD 15th January 2018 from Kaleidoscope Home Entertainment, is a tense, violent neo-Western from the producers of The Raid 1 and 2 that will have you gripped from start to finish.
John Bernthal, Imogen Poots, Rosemary Dewitt, Christopher Abbott, Jared Abrahamson
Jamie M. Dagg
Chris Ferguson, Brian Kavanaugh-Jones, Fernando Loureiro
Kaleidoscope Home Entertainment
1 hour 33 minutes
15/01/2018
#SweetVirginia
Thank you for supporting DVD365.net when you order using the link(s) below. As an Amazon Associate we earn from qualifying purchases
Buy DVD
Information

Sweet Virginia, released on DVD 15th January 2018 from Kaleidoscope Home Entertainment, is a tense, violent neo-Western from the producers of The Raid 1 and 2 that will have you gripped from start to finish.

As layered as it is tense this is a tight, brutal thriller with a meticulously crafted plot that starts with a gruesome murder scene and doesn't let up from there. And it's all carried along by a first-rate performance from The Punisher himself, John Bernthal.

Former rodeo star Sam (John Bernthal; Netflix's The Punisher and Daredevil, Baby Driver, Sicario, The Walking Dead), now lives a quiet small town life running a motel, where he begins a seemingly innocent friendship with Elwood (Christopher Abbott). Unbeknownst to Sam, the young man is responsible for the spate of violence that has recently gripped his hometown.

As the community unravels, Sam's loved ones, neighbours and business patrons become involved in the terror that unfolds, while Sam must face his past and present relationships to face off against this unpredictable predator.

Related Articles
I Kill Giants, Frank & Lola, Green Room, Knight of Cups, She's Funny That Way, Jimi: All Is By My Side, Need for Speed, A Long Way Down, That Awkward Moment, The Look of Love, A Late Quartet, Comes A Bright Day, Fright Night, Christopher and His Kind, A Bouquet of Barbed Wire, Cracks, Vivarium, The Father, Prisoners of the Ghostland
Keep Watching, American Animals
The Sinner: Season 1, It Comes at Night, Criminal Activities, A Most Violent Year, Martha Marcy May Marlene, Piercing, Catch-22, Possessor, Possessor, The Forgiven
River
For your consideration 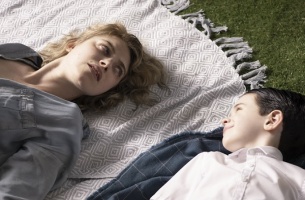 HotDVD
Following rave reviews, starring Jesse Eisenberg and Imogen Poots and reminiscent of the likes of Get Out and TV's Black Mirror, Vivarium is released on DVD 25th May 2020 courtesy of Vertigo Releasing. END_OF_DOCUMENT_TOKEN_TO_BE_REPLACED
Comments
UHD Releases News Pick

UHD
The end of the line is only the beginning in a wild, non-stop thrill ride through modern-day Japan as Bullet Train is released on DVD, Blu-ray and 4K UHD 24th October 2022 from Sony Pictures Home Entertainment END_OF_DOCUMENT_TOKEN_TO_BE_REPLACED
Top PicksView