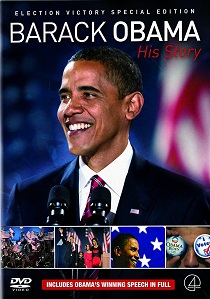 News
News Article Go back to homepage
The fascinating story of how Barack Obama made his meteoric rise to power is told in Barack Obama - His Story is released on DVD by 4Digital Media on 8th December 2008.
4Digital Media
1 hour 51 minutes
08/12/2008
Thank you for supporting DVD365.net when you order using the link(s) below. As an Amazon Associate we earn from qualifying purchases
Buy DVD
Information

On Wednesday, 5th November 2008, history was made when Barack Obama was elected the 44th President of the United States of America. The fascinating story of how this remarkable 47-year-old - born to an American mother and a Kenyan father - made his meteoric rise to power is told in Barack Obama - His Story, released on DVD by 4Digital Media on 8th December 2008.

Specially updated to include the recent historic scenes of Obama's election victory, together with his moving acceptance speech from Grant Park, Chicago and John McCain's concession speech, the DVD also features many of the key moments and personal public appearances from Obama's extraordinary journey to the White House. Using rare archive footage and photographs, Barack Obama - His Story reveals how one young black man strove to overcome a troubled adolescence and a difficult family background to become one of the most notable multiracial politicians of his time.

The story of his rise to what is arguably the most powerful political post in the world is all the more exceptional when one considers that this charismatic African-American leader only became a Senator in 2005 and in just three short years managed to make such an indelible impression on the global political landscape.

A definitive record of a truly unique moment in American and world history, Barack Obama - His Story also comes with a host of special features that provide further fascinating background information and insights into the world of US politics. As well as including Obama's full, unedited victory speech, these features also include a look at other famous presidential campaigns, the history of civil rights in the US and the Black Power movement, and a featurette on the dangers of becoming the President of the United States of America.

HotDVDBDUHD
From the acclaimed director of fan-favourites such as Baby Driver, Shaun of the Dead and The World's End comes the tribute to 1960s London in Last Night In Soho, available to own on DVD, Blu-ray and 4K UHD 31st January 2022 from Universal Pictures (UK). END_OF_DOCUMENT_TOKEN_TO_BE_REPLACED
Top PicksView