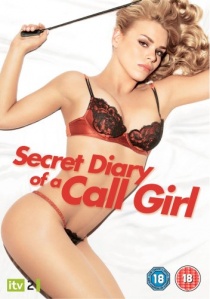 The sexiest, most talked about TV show of 2007 becomes the first must-own DVD release of 2008 as Warner Home Video presents the gorgeous Billie Piper in ITV2's smash hit drama Secret Diary of a Call Girl, released on DVD from 7th January 2008.

To her parents she's Hannah, the legal secretary. Hannah has a responsible job that involves working lots of unsocial hours in the evening. Hannah has her own set of clothes and her own friends. Even her closest pal has no idea about her working life.

Belle also has strict rules. The most important being that she never becomes emotionally involved. That's before she meets a handsome young single man. On their first meeting Belle looks stunning but it is a complete disaster. He tells her madam (Cherie Lunghi) that next time he'd like a girl just au naturel. Belle was too overpowering. But crafty Belle's professional pride is hurt. She elbows out another call girl and ensures they have a second date. This time everything goes wonderfully and in an unguarded moment she lets slip her real name. Hannah. And the client wants Hannah. Not Belle. And the most important lesson she's learnt: to do this job and keep sane, she has to keep Belle and Hannah separate.

HotUHD
Now more stunning than ever before, return to the stunning locations and epic adventures in Peter Jackson's Middle-earth in The Lord of the Rings Trilogy, arriving on stunning 4K UHD 30th November 2020 from Warner Home Video. END_OF_DOCUMENT_TOKEN_TO_BE_REPLACED
Top PicksView