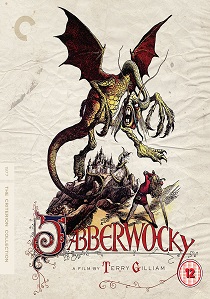 Welcome to the kingdom of Terry Gilliam: his solo-directing debut, a gonzo medieval comedy...

Amid the filth and muck of England in the Dark Ages, a fearsome dragon stalks the land, casting a shadow of terror upon the kingdom of Bruno the Questionable. Who should emerge as the town's only possible saviour but Dennis Cooper (Michael Palin; Life of Brian), an endearingly witless bumpkin who stumbles onto the scene and is flung into the role of brave knight?

The first outing as a solo director by Terry Gilliam - inspired by Lewis Carroll's poem Jabberwocky and made on the heels of Gilliam's success as a member of the iconic comedy troupe Monty Python - showcases his delight in comic nonsense, with a cast chock-full of beloved British character actors. A giddy romp through blood and excrement, this fantasy remains one of the filmmaker's most uproarious visions of society run amok.

Released on Blu-ray 20th November 2017 from Sony Pictures Home Entertainment, Jabberwocky comes with a 4K digital transfer from a brand new restoration by the BFI National Archive and The Film Foundation, approved by Terry Gilliam, with 5.1 surround audio mix, supervised by Gilliam and presented in DTS-HD Master Audio.

BD
From the Wachowski brothers and Joel Silver, the masterminds behind The Matrix trilogy, comes another intriguing, action-packed fantasy-thriller in V for Vendetta, released on 4K UHD 2nd November 2020 ... END_OF_DOCUMENT_TOKEN_TO_BE_REPLACED
Hot PicksView