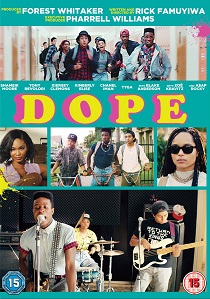 From writer/director Rick Famuyiwa (The Wood, Brown Sugar) comes the critically acclaimed coming-of-age comedy Dope, available on Digital HD and DVD 28th December 2015, courtesy of Sony Pictures Home Entertainment. Rising stars Shameik Moore (Baz Luhrmann's The Get Down), Tony Revolori (The Grand Budapest Hotel), and Kiersey Clemons (TV's Transparent) play a trio of self-professed high school geeks and bandmates growing up in the hood who find themselves caught up in an unexpected adventure that will forever change the rhythm of their lives in this smartly humorous film set to the tune of classic '90s hip-hop and featuring original songs by Pharrell Williams.

Malcolm (Shameik Moore) is a brilliant geek who is obsessed with '90s hip-hop. He and his two best friends play in a punk band together and get hassled at high school for their throwback style. When illegal substances are hidden in his backpack at an underground dance club, his life gets extremely complicated. Malcolm will go to crazy lengths to achieve his dreams: getting into Harvard University, getting closer to his fantasy girl Nakia (Zoë Kravitz) and cashing in his fortune in bitcoins.

HotDVDBD
From the producers of Nobody and John Wick comes a bare-knuckle, coal-dark holiday action-comedy that says you should always bet on red as Violent Night sledges in on DVD and Blu-ray 6th March 2023 from Warner Home Video. END_OF_DOCUMENT_TOKEN_TO_BE_REPLACED
Top PicksView